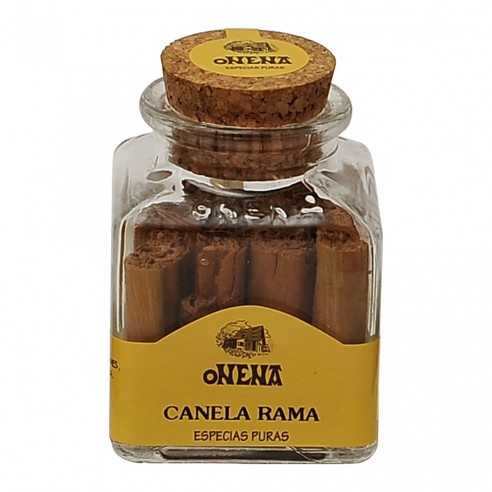 The Onena cinnamon sticks come from Sri Lanka and are known as real cinnamon or Ceylon cinnamon. Of the highest quality (00000 Ekelle) they enhance your dishes with a noble and mild aroma. 100% natural, the decorative cinnamon bark can be used to refine drinks, upgrade desserts and optimize baked goods. Indian cuisine also likes to use cinnamon for hearty meat dishes.

8437011958020
€16.27
2 Reviews
Winner in the category for best Extra-Virgin Olive Oil by the Ministry in the ‘Premio Alimentos de España’ (Spanish Food Awards). Finca la Torre is officially the finest oil in Spain and quite possibly the world-over. Awards of Finca la Torre

8421547007550
€3.59
The delicate, thin garlic slices from Onena inspire with their wonderful, strong garlic taste. Dried and without flavor enhancers, the gluten-free, vegan garlic flakes are durable and aromatic. Use the popular and healthy condiment as well as fresh garlic for sauces, meat, vegetable dishes and soups. Or you can enjoy it with olive oil on a slice of toast.

8437002905149
€4.50
1 Reviews
La Maja elaborates this incredible balsamic vinegar of great intensity of aromas, creamy and sweet. It is ideal for elaborating dishes of the best high quality.

8437002820008
€18.14
Probably the best extra-virgin olive oil from La Rioja. Organic. From a part of Spain that has been dedicated to olive growing for centuries. Awards of Almazara Ecológica de La Rioja

8421547007727
€3.59
The cardamom pods, harvested by hand, are added whole to the dish as a sweetish-hot spice during cooking, or opened before preparation. To fully enjoy the spicy cardamom aroma, grind or grind the seeds. They taste good in coffee, tea, punch and fruit salad. They serve as a gingerbread spice and are an indispensable part of the Indian masala.

8421547007406
€3.59
The fine garlic granules from Onena can be wonderfully dosed with a strong taste. Even the smallest amounts can be removed and added to cold or warm dishes without any problems. When seasoning with the aromatic and healthy garlic granules, the annoying garlic peeling is no longer necessary and the fingers remain odorless. The popular condiment is ideal...
Tap to zoom